David Arieti has been involved in environmental issues for almost forty years.  He went to the University of Denver for his BA degree in Science Area Major. He worked on The Sea of Galilee where he did algal research. He returned to the US where he earned his MS degree in Marine Science from Long Island University. He worked studying the effects of 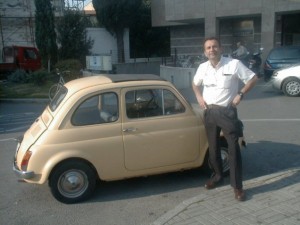 chlorine produced oxidants on Chesapeake Bay in Maryland. He then worked at consulting firms in Washington D.C. where he worked on projects that dealt with the fate of pesticides in the soil; health effects on people working with the dyeing and finishing of textiles, and food additives. He then worked at the Baltimore Environmental Center as research director where he worked on hazardous waste issues. He also worked on the Hudson River studying the fish that were prevented from entering the waterways used to cool the condensers from the Indian Point Nuclear Power Plant in New York.

David also began teaching Environmental Science and Biology as an adjunct professor at various colleges in Maryland and Illinois, where he is today. He has been the recipient of three best Teacher-of-the-Year awards at three different colleges. In 1996 he won at Columbia College, in 2002 he won at Oakton Community College, and in 2005 he won at Daley College; all three colleges are in the Chicago vicinity.

He wrote his first book, entitled The Earth is My Patient in 2005. He has gathered information through newspapers, books, and magazines, as well as the electronic media (radio and TV) and witnessed in real life the havoc that humans have wrought on the planet. In his first book, he lists the real causes of environmental pollution and its effects on the planet, as well as possible solutions. It is due to his witnessing the increasing deterioration of the environment due to humankind’s stupidity that led him to continue writing. Now, together with two doctors and an illustrator, he is putting together a book loaded with the effects of humankind’s slide toward extinction based on its inability to do something extreme and constructive.

By constructive we mean ending the use of fossil fuels to include a permanent moratorium on off shore oil drilling; limiting human overpopulation (this will be a hard one because certain religions encourage many children), investing tremendous amounts of money in solarizing the planet (getting all our electricity from the sun);  and demilitarizing the planet by getting rid of weapons such as planes, tanks missiles, etc. These consume tremendous amounts of money which could be used for building necessary structures like water treatment plants and schools instead of destroying these structures during war. And perhaps doing the most difficult thing possible: GETTING RID OF MONEY AND FINDING A BETTER ECONOMIC SYSTEM so that poor people have a chance at health and a decent life.

David Arieti has been involved in environmental issues for almost forty years.  He went to the University of Denver for his BA degree in Science Area Major. He worked on The Sea of Galilee where he did algal research. He returned to the US where he earned his MS degree in Marine Science from Long [...]