The Earth is My Patient 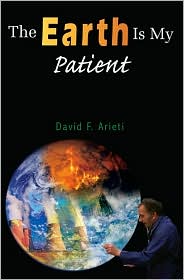 The Earth is My Patient

This a book about the real causes of environmental pollution. It treats the earth as if it is sick patient in front of a doctor. The book starts with the definitions of environmental pollution and discusses the problems facing the world’s ecosystems such as water pollution, air pollution and land pollution (symptoms). The real causes of pollution include overpopulation, greed, poverty, politicians etc. Then it discusses the (cure) for the symptoms.

These include getting rid of fossil fuels such as coal, oil and gas and solarizing the planet by using solar energy to generate electricity as well as implementation of the Earth Charter: a group of policies put together to try to make people respect both life and the environment. There are also seven appendices which include a glossary of environmental terms and a list of diseases caused by climate change including their symptoms and treatment.

David Arieti has been involved in environmental issues for almost forty years.  He went to the University of Denver for his BA degree in Science Area Major. He worked on The Sea of Galilee where he did algal research. He returned to the US where he earned his MS degree in Marine Science from Long [...]